This isn’t the best picture but we are officially boarding 10 Llamas & Alpacas! Two and eight respectively. They are really fun to watch and very different from our horse we had (he was all healed up and went to a stable where his owners could get him riding again).

The LlamaPacas will be with us just for a couple/few months-basically until there is nothing left for them to eat (without making our pastures completely dirt) and their owner takes them back to her place for the winter. The best thing? The Llamas are protectors so they’ll help keep any predators (domestic or otherwise) away from our property. : )

And! (sorry there isn’t a photo here) our she ducks are working on hatching a hole gaggle of eggs! Not really sure how it works since they are laying on eggs that were laid anywhere from 8-2 days ago (does that mean we’ll have baby ducks everyday for like 2 weeks?).  She’s also laying on one of our chicken’s eggs…Hey…Why Not? (that’s our Farm Motto by the way). Why Not? have a horse, breed rabbits, sacrifice a cat to the hawks every few months (we still have Senor Socks by the way-8 months and counting!), have someone pay us to mow  our 5 acres of pasture with their LlamaPacas…you get the idea.

I will work on some photos of the ducks (we have one drake and two girl ducks-that’s the (un)official way to refer to her : )

I pulled this photo from Google/MetzerFarms.com and they look almost exactly like this: 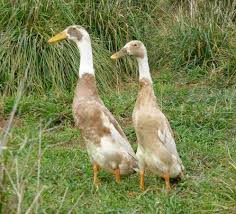 And so you can say you learned something new today here’s what I just learned (from Wikipedia):

So officially one drake and two ducks, or hens, ornithologically speaking.

Maybe for my next post I’ll have photos of ducklings! Not the adult ones to eat but the ones sporting downy plumage…